Like the rest of Greece, the island of Rhodes is located at the crossroads of two major sea routes of the Mediterranean between the Aegean Sea and the coast of the Middle East, as well as Cyprus and Egypt.

It is the largest of the Dodecanese islands in terms of both land area and population.

Historically, Rhodes was famous worldwide for the Colossus of Rhodes, one of the Seven Wonders of the Ancient World. The medieval Old Town of the City of Rhodes has been declared a World Heritage Site. Today, it is one of the most popular tourist destinations in Europe.

Civil aviation on Rhodes started after the second world war, on the location of the nearby military Rhodes Maritsa Airport. This was the island's main airport until 1980. That was when the new Rhodes International Airport was opened.

The new "Diagoras" airport was built in 1977. It was decided that, on this location, it would meet the needs of the island better. Over the passing years, many improvements have been made to the airport, like expansion of taxiways, platform and airport buildings. The most recent upgrade is the new passenger terminal, which opened in 2005, to better accommodate the growing amount of charters and passengers.

By car the airport is easily reached via the main road along the coast. Rhodes city is about 20 minutes driving away. The airport is also frequented by buses. Buses to Rhodes city depart regularly and the journey takes about 30 minutes. The bus stop is located 300 meters away from the airport. A taxi can be taken just outside the arrivals hall. 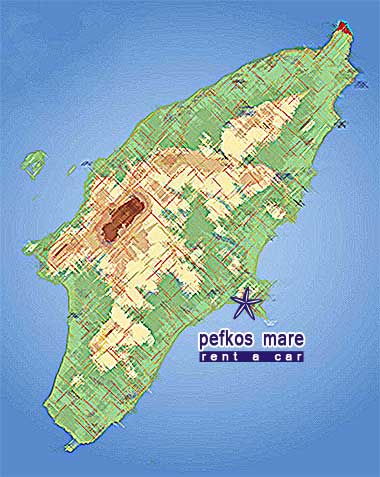